Go vote for your favorites in the

Jace, Jem and Will are still in the running!

Cassie just posted the link to chapter one of City of Fallen Angels. It’s called “The Master” and you can click here to check it out on her official website. Make sure to let us know what you think about it!

In a recent article posted by Kara Warner on MTV.com she recommended that Alex Pettyfer play Jace Wayland in the upcoming TMI movie. She wanted to know when we were going to hear more on his decision of whether he was going to play Jace in "The Motal Instruments" or Peeta Mellark in "The Hunger Games". Which I am sure is something we have all been wondering as we sit on the edge of our seats waiting for news about the decision of who will play the role of the bad-ass, ever sexy Jace Wayland. Alex's responce was,

Not sure. I'm a big fan of both books, and when both projects are moving forward I'll hopefully interact.

So, what do you think? Will Alex finally decide to play Jace? Guess we will have to continue to wait and find out. You can check out the original article posted on MTV.com here.

The Clockwork Prince placeholder cover has just been added on our Infernal Device's page. Cassie just released the placeholder cover recently. The final cover is scheduled to be released at Book Expo America in May. The cover’s background shows Temple Bar on Fleet Street, near the Institute.

Cassie did include a quote from CP:

“What desperation drove you to me, in the middle of the night, in a rainstorm? What has changed at the Institute? I can only think of one thing…” – Magnus

I really like the placeholder cover, personally. Be sure to check it out!

FaceOfTheFan.com has recently launched a casting call for The Mortal Instruments! They are looking for someone who can play a male between the age of 18 – 25 for the role of Jace Wayland. If you are interested you can submit auditions via FaceOfTheFan.com. You can click here to see a copy of the press release providing all the details. The casting call ends on February 25th. This could be a great opportunity! So, make sure to check it out!

The cover for the fourth book in Cassandra Clare's The Mortal Instruments series, City of Fallen Angels, was revealed earlier today. The video below was posted on Entertainment Weekly's Shelf Life, along with an excerpt from from the first chapter of City of Fallen Angels.

To read the excerpt from chapter one of City of Fallen Angels, posted on Shelf Life, click here!

I absolutely love the new cover! I like that they changed it up just a bit from the first three to show a new journey that all of our beloved TMI charcters are starting.

It seems that Cassie is very pleased with the new cover as well. Below is an excerpt from the posting Cassie made on her LJ earlier...

I've always loved the covers Cliff Neilson has done for the MI series. Each one is fun and different in its own right. For the "second cycle" of The Mortal Instruments we wanted to do something that would link the cover aesthetically to the earlier covers while having a different quality that announced that this was a new chapter in these characters' lives. We decided that each of the Second Cycle covers is going to have two characters on it — in this case Clary and Simon.

Check out Cassie's full posting for an up close look at the new City of Fallen Angels cover! 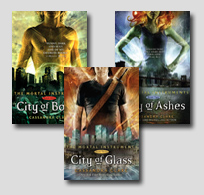 City of Fallen Angels is Coming

The Clockwork Prince is Coming

Disclaimer: This site and its content & graphics are copyright © 2010 RabbidBunnie and Forbidden Love. "The Mortal Instruments" are copyright Cassandra Clare and related entities. All rights reserved. Any reproduction, duplication or distribution of these materials in any form is expressly prohibited. This web site, its operators and any content on this site relating to "The Mortal Instruments" are not authorized by Cassandra Clare. This site is by fans for fans. No copyright infringement intended.

This site is best if viewed using

This website was built with Webnode
You can also have an impressive website for free!
Try it out